I had the great pleasure of learning about this race by accident.  I follow Team Long Brothers on Facebook, and noticed them post about a triathlon they would be doing in Allentown, PA at the end of June.  I thought it might be cool to day trip it up there with the kids so we could watch the Long Brothers in action.  I looked into the event and who was organizing it and was amazed at what I read.

Mikayla’s Voice was the organization that was putting on this AWESOME event called Tri for Inclusion.   “Mikayla’s Voice Tri for Inclusion is much more than a race. It is a priceless opportunity for all children and young adults and an important message for our community. Kids of all abilities have the opportunity to compete side-by-side and together in something they had likely not dreamed possible or ever planned to do. Kids are able to sign up to compete in the swim, bike and run ~ or just one event as part of a relay team. Their efforts show our entire community that there is always a way to include everyone in everything.”  Basically it was a triathlon for any and everybody, no matter if the child was disabled or not, participating side-by-side.
I had long thought about doing a triathlon with Kristina and watched many you tube clips of parents/siblings doing them with their disabled athlete, like the Hoyt's.  I always figured I could tow her in a raft, tow her in a buggy on the bike, and she could run/jog /walk with me on the run.  I talked to Kristina about wanting to do it and she was all for it.  Having done the Ironkids race the last two years in Lake Placid, she wanted to try all three.  Emma overheard us talking and asked if she could do it as well.  Next thing I knew, my niece Brenna was also interested and now we had an official team.  Conor was a little too young and was very pissed about that, because he really wanted to do it.
I emailed Kim from Mikayla’s Voice to ask about I Tri 4 Downs being a sponsor of the event since it seemed right in line with what we like to do.  I asked the Board of I Tri 4 Downs, and we became one of the main sponsors of the day.  We wound up having all five of us going up, as well as Karen Halm, a Board Member and good friend.  Brenna got sick and could not make it.
Before the event, I was talking to a donor to I Tri 4 Downs and telling him about this event.  I told him I thought I was going to buy a Tag-along Bike for Kristina to try.  Since she is 13 now, and a little too big for the buggy, I wanted her to feel like she was one a real bike.  That conversation turned into him giving me his old Ally Cat bike that his grand kids had outgrown.  I also got her a seat back with a belt system to make her more secured.  Kristina loved it!  We practiced while we were on vacation before the big day.

This is quite different.  Race day came and I was not nervous or anxious.  I figured I could handle the 75yard swim, 3 mile bike, and .6 mile run with no problem….Kristina and Emma on the other hand had no idea what to expect.  The first two waves for the swim were all the kids that needed to be in a raft getting towed.  What a sight to see, the smiles on those kids faces was no different then the smile I have during a race.  Kristina was wave three, since I was her chaperone I could go in the water with her.  She did awesome, swam all 75 yards without any help from me.  Emma was wave 8 and would be going solo.  Cathy and Karen saw her and said her goggles busted just as she hit the water.  I had promised Emma that Kristina and I would wait in transition before the bike so she would not be alone. 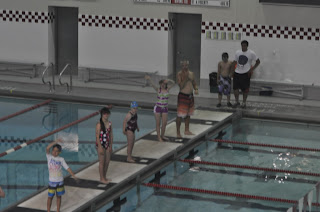 Kristina and I waited for Emma just like I promised.  Once Emma got out and I found out about her mishap, we hit the road for a tough 3 mile hilly bike ride.  The bike went 1.5 out from the school and returned.  It was surprisingly hilly for some of the kids.  We stayed together the entire ride, even when Emma had to walk up some of the hills.  It was awesome to see so many disabled athletes out there biking along side so called regular kids. 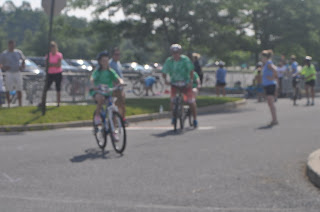 After the bike, Emma was not feeling too good, so she decided she did not want to run the .6 mile run around the school.  So Kristina and I headed out for whatever she could handle.  She did a good job of running, jogging, and walking when she was tired.  Tons of volunteers gave Kristina lots of encouragement! 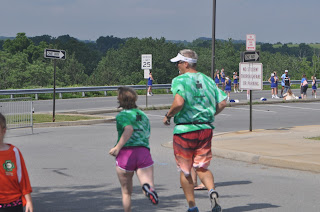 We had a great day.  It was great that I Tri 4 Downs could be part of this.  Mikayla's Voice said that over 140 athletes participated and that this was the only kids triathlon with disabled and regular kids participating at the same time.  Some kids did it solo, some were a relay team, and some needed chaperones.  The finisher medal I received from this race is #1 on my wall at work. 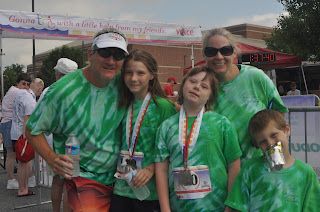 Organizations We Have Helped 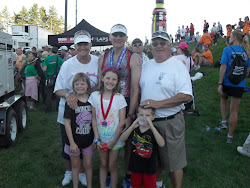 My kids & Parents after I finished!

I Tri 4 Downs
Philadelphia, PA, United States
Hard working father and husband, trying to enjoy life to the fullest. Age grouper who trains hard and enjoys a cold beverage as my reward! I race to raise money for children with disablilities. 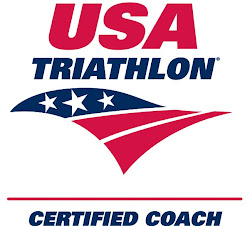